Enough messing around, time for some serious ethnological discussion. The term “anti-Christ” gets thrown around a lot these days, but have you ever thought about what that really means to be the antiChrist?

Have you ever thought about the disparity between what typical “evangelical Christians” espouse as their beliefs and the teachings of the actual Son of God as written in the Bible?

I submit to you that this is actually the type of “counterfeit Christianity” referenced above.

“The Bible does not reveal specifically who the Antichrist is, speaking instead of his corrupt teachings. In 2 Thessalonians 2, Paul prophesied of a “man of sin,” a liar and deceiver whose natural abilities Satan enhances by supernatural power in order to confuse people in the end time. In addition, Christ inspired John to write of a “false prophet” to come at the end time (Revelation 13; Revelation 16:13; Revelation 19:20).”

What the Bible seems to be warning us about is a man who rises to political power preaching his own false Christianity. A man who says he knows better than Jesus. A man who twists the words of Jesus to suit his own doctrine of hate and destruction, there putting himself ABOVE GOD. 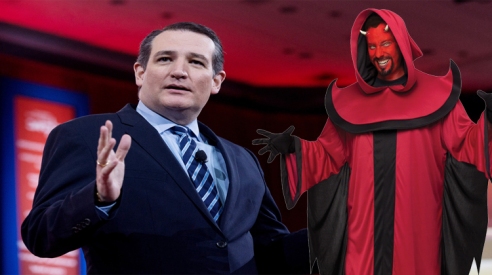 One Response to “Ted Cruz Is The AntiChrist”