As a self-appointed scholar of all things related to the television show, South Park, I have given much thought to this matter. Rather than make up a strict set of guidelines for this list, I would weigh various criteria such as how much the character has grown and how important their part is on the show, taking into account their popularity in the larger pop-culture universe (for good and bad). And finally, I would weigh all this against my general feelings towards the character and ultimately how funny I find him or her. I’m sure I could have made more obscure choices for the sake of being novel or to prove how much of a super fan I am, but I am secure enough not to go down that road.

10.) Fosse and Bill. I actually had to look up what these guy’s names were. They appeared in a few early episodes, most notably in “Lil’ Crime Stoppers.” I like them simply because they remind me of Beavis & Butthead: always laughing all the time. They seem to be pretty stupid, also not unlike the main characters in my other favorite show. Plus they have stupid hair, like BnB. They also say everything is “gay,” which I know they say you shouldn’t do in those commercials, but I won’t tell Wanda Sykes if you don’t. 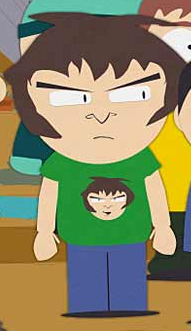 9.)  The leader of the sixth-graders. Apparently, this kid has no name, despite appearing in quite a few episodes, my favorite being “The Return Of the Fellowship of the Rings To the Two Towers.” The main reason that I am a fan of this kid is because he has the sheer audacity to have a picture of his own face on the T-shirt he wears. You have to respect somebody like that. In reality, although he plays the part of the tough guy, he’s actually kind of a pussy. He rides around on his BMX bike threatening little kids, but when push comes to shove, he and his whole gang get their asses kicked by a fourth grader with a mullet. Plus, he has beaten off to a picture of Eric Cartman’s ass. Despite all that, the shirt wins him a solid showing on any list of mine.

8.) Bebe. Bebe’s inclusion might seem to be my concession to political correctness, but I am including her because of all the female archetypes on the show, she seems to be the one most enlightened. She’s not a stuck up know-it-all like Wendy. She’s not prone to fits of violence like Shelley. She’s a sex crazed slut, but she is comfortable with that fact and owns it, unlike the Raisins girls. She even recognizes the fallibilities in her own mother. She was the first in her class to develop luscious hooters and to get attention from the boys. Clearly, we know she is interested in them as well, but rather than using this to her advantage and decides that she’s not going to win their favor that way and she covers them up so the boys will like her for who she is, which they don’t. I think that’s admirable. 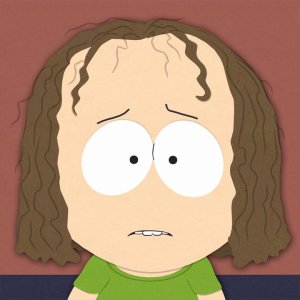 7.) Kip Drordy. Kip is a pathetic loser whose only friend is Kyle- and that is only on Facebook. Kyle drops him as soon as he realizes he’s being dragged down in popularity due to his association with this sad sack of crap. This kid has nothing going for him. He’s ugly. He doesn’t appear to be especially rich or intelligent. He likes clowns. Even his parents feel sorry for him. His entire existence on this show seems to be just a shameless ploy for the viewer’s sympathy. And let me tell you, it worked on me. I couldn’t help but feel for this kid. As you might notice, I have a certain soft spot for losers. I know the episode, “You Have 0 Friends” was really about Facebook and the shallow relationships it cultivates and I also know that the episode ends happily for Kip, but the part that really stuck with me is that poor shmoe sitting at his desk, feeling utterly alone in the world. I really had no choice but to include him, because if I didn’t, I would be haunted by that image thinking “I guess I’m not even cool enough for some asshole’s pointless waste-of-time-list on the internet!”

6.) Timmy. You might think it blasphemy to place a second-rate Timmy pretender like Jimmy above the real thing, but let’s face it: Timmy is a one note character. I know that there is supposed to be this whole other level to Timmy that it is implied in an unintelligible way.  It’s supposed to be amusing that we are missing out on it by not being to understand what the hell he means when he just repeats his name over and over, but for me, it quickly gets old. It’s not unlike Kenny being able to be understood by the other guys. He’s a good person with a strong sense of morals and I’ll give you that he clearly understands more than people give him credit for, but if there were more scenes like the ones where he cuddles up to Gobbles the retarded turkey, I would be able to feel more for this sight gag on wheels. Which brings me to my next choice…

5.) Jimmy. Let’s get one thing straight: I don’t like Jimmy. Jimmy’s an asshole. He’s a roid-raging egomaniac who’s not funny, has a huge sense of entitlement and is a worse person than Timmy in every way. If this was a popularity contest, Timmy would beat Jimmy every time.  But if there is one thing I appreciate more than a loser, it’s a jerk! Let’s look at the facts. Jimmy had no problem usurping Timmy’s place in the Mountain Scouts. He trotted him out as a prop for his mean-spirited “comedy” routine. He took steroids to win the Special Olympics. He beat up his girlfriend and then he started whaling on his own mother. And let’s not forget he kicked Timmy’s ass – a kid in a motorized wheelchair! I don’t care if you are on crutches- that’s low. AND he wasn’t even on roids at that time! His jokes are stupid and corny , his delivery is terrible and he’s constantly pandering to the audience. I get it; that’s the joke. But do you know who doesn’t get it? This crippled prick! He claims he doesn’t want any special treatment and all he wants  is to just be one of the guys, but let’s be honest; he wouldn’t want any comedy contests without the sympathy factor. A hypocrite, plain and simple very much.

4.) Token. Token is an inspiring example of how an African-American character can go quite literally from being a “token,” to an integral part of the show in just a few seasons.  Originally named Token Williams, they changed his name to Token Black, lest anybody need the joke to be spelled out for them. But the joke is actually that he is not the typical token black character. He’s the rich one. He’s the one with the educated parents. It’s played up a little more in the episode “Here Comes the Neighborhood,” where Token’s family appears to be the only one in town who isn’t stupid trailer trash. He is smart and thoughtful, but he speaks up for himself and isn’t about to let anybody play him for a bitch. He doesn’t let Stan off the hook when his dad uses the N-word on wheel of Fortune, he is grossed out and disgusted by his and all the other parents when he mistakenly watches the porno, Backdoor Sluts 9, and in case you doubt that he’s “street” enough, he climbed into and lived with a cage full of lions at the zoo.

2.) Kyle’s cousin Kyle. For sheer comic effect, this walking, talking Jewish stereotype should take the top spot. He might seem tame now, but from the first time he got off that airplane, I wondered “how could they get away with this?” Every time he opens his mouth, I laugh. When he asked Cartman if he got his Jacket at Bosco’s, that was probably the only time in my life that I’ve done a genuine spit take. I’m actually laughing right now as I write this, just imagining some of the things he’s said. One time, in the summary of the episode, he was described as having “New York sensibilities.” This description alone made me laugh hysterically. Just think about that. Like Ralph on The Simpsons, Kyle is probably better in small doses. When he swoops in to lose a baseball game or acts as somebody’s accountant, he’s much better utilized than if he had his own episode. It’s because Kyle’s cousin Kyle remains oblivious to his own obnoxiousness and indeed the annoyance of anybody around him, that he’s so funny. It’s the original Kyle who bares the brunt of it. Even the fact that his own mother names him “Kyle 2” in an effort to avoid confusion speaks volumes to what Kyle must endure. In contrast to Cousin Kyle, who appears to exhibit every negative stereotypical trait, Kyle himself seems to have few. All his life he’s been picked on for being Jewish in a town full of rednecks and now he gets a visit from the embodiment of everything they’ve hated him for. It’s almost tragic.

1.) Butters. From his earliest nonspeaking appearances on the show and the South Park movie, Leopold “Butters” Stotch has risen to become one of the most popular and beloved characters ever. He even had his own episode, which stands as the rare exception to my rule forbidding minor characters from having their own showcases. It’s actually one of my favorites. How could you not root for this little guy? He’s adorable! Whatever life throws at him, he endures it with a smile. And life has thrown a lot of shit at this kid. He is picked on by his classmates and tortured by Eric Cartman. His parents treat him in a manner which can only be called “child abuse.” He has been humiliated on national television several times. Beaten, tricked by his parents and friends, and molested by his Uncle Bud. His own mother tried to drown him in her car.  He’s haunted by the realization that on two separate occasions his dancing prowess has killed innocent people. This motherfucker can’t seem to catch a break! Yet he always manages to look on the bright side of things. Well, not always, but most of the time and surely more often than he should. And his capacity for love and forgiveness is biblical in scope. Like the Mormons. No matter what he’s been through or how he has been wronged, he hums his little tunes and frets away with his hands, but never wavers in his belief that you should do the right thing. He even treats his hos with respect. He is everything that is great about this show. Plus he watched his dad jack off and then get fucked in a gay bath house.

Jason, the kid with the receding hairline.

The Goth Kids- I like the little one the best.

Did I leave anyone out? Did I piss you off with my choices? Tell me in the comments!

Special thanks to The South Park Archives and South Park Studios for help in my research and use of their images.