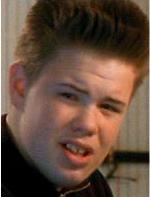 Letter to Devin Ratray – Devin Ratray is an actor, probably best known as “Buzz”, the older brother in the hit movies Home Alone and Home Alone 2: Trip to New York. This is a letter that I wrote to him like six minutes ago:

Dear Devin,
First off, I want to say I am a huge fan of yours. I have seen both Home Alone movies at least once and I was truly moved by your performance. I have never written to a celebrity before, so please excuse me if this is awkward for you.
I just want to know why you’re such a dick to Macaulay Culkin? The poor kid is like 8 or something. He’s just a little kid! You’re an experienced world weary man of 12. You’ve been to France, for Christ’s sake. I mean, he obviously looks up to you, right? You’re his big brother, it’s up to you to look out for him.
I get it. You don’t want this little kid tagging along and bugging you all the time, especially when you’re shooting BB guns and jerkin’ it to your Playboys, but I think when you get older, you’re gonna wish you were nicer to him.
I don’t have a big brother, but my little brother is actually much tougher than I am and would be a jerk to me and push me around all the time too, so I can sympathize with poor Kevin. Plus, the kid is rich now. I think he has like twenty mil or something. Boy, I bet you feel stupid, huh?
I’m sure that deep down you actually do love him, but it never hurts to tell him every once in a while. Like at the end of the movie, when you tell him it’s pretty cool that he didn’t burn the house down. That wasn’t so hard, was it?
I think you’d feel pretty bad if he did burn the house down or if those robbers tied him up and tortured him or something and then killed him so he wouldn’t rat them out to the cops.
I mean, I know it’s all funny when he hits them with bricks and stuff, but if they had caught him, they probably would have done some fucked up shit out of revenge. I mean, he burned that one guy’s head and stuck the nail in the stairs so that other guy stepped on it with his bare feet. I know if he did that to me, I’d want some serious payback, and I’m not even a hardened criminal who’s done time like those guys.
Imagine if he had died – your little brother’s body all slashed up, his head and fingers cut off so his body couldn’t be ID’d – knowing he went to the grave thinking that you hated his guts? Man, that would haunt you the rest of your life!
So ease up on him, guy. He’s the only brother you have! Unless that kid with glasses is your brother, but I think that’s your cousin. That kid sucks, why don’t you beat up on him instead?
Anyway, if you can send me an autographed picture or something, that would be great.
Your pal, Eric